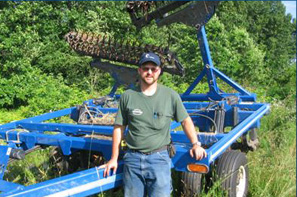 Back to all Testimonials

Here's what Jeff had to say about using the SMART-TILL® on his field:

When Jeff Miller took the SMART-TILL® to his Indiana fields, he found it to be a well-built and user-friendly vertical tillage tool. It even filled the grain cart and combine ruts left from the previous year’s wet harvest.

"The weed pressure was gone when I used the SMART-TILL®, plus I was not seeing any compaction like I might see when using a disc," he says. "In hard ground I got the penetration I was expecting with the SMART-TILL®."

In lighter ground where he was losing surface moisture, Jeff found that with SMART-TILL® he was recapturing that moisture.

"The SMART-TILL® did a better job than my disc in past years," he says. "As a matter of fact, I sold my disc and will rely on the SMART-TILL®."